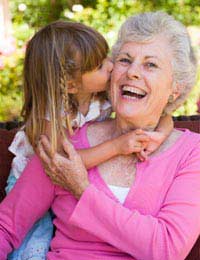 Margaret Donald is a very proud grandmother. She has a lovely daughter and three beautiful grandchildren: Karen (8), Craig (6) and Rebecca (3). She spends many hours looking over photographs sent from her daughter, dotting on the three lively little lives. But Margaret lives each day with a heavy heart – she has never seen her grandchildren, because they live 10000 miles away and she has a serious phobia of flying.

Linda, Margaret’s daughter, and her husband moved to Melbourne two years before their first child was born. Although Linda has invited her mum to visit, and although Margaret would love to spend time with her daughter’s family, she cannot beat the fear that plagued her life. Margaret’s late husband often suggested they go on holiday abroad, but after worrying too much about the flight, they always settled for two weeks in the Lake District.

One of Margaret’s closest friends even tried to get her on a short flight from Glasgow to London. They arrived at the airport, checked in, had a coffee in the lounge, but at the very last minute, as the flight was called, Margaret abandoned her journey and rushed from the terminal building.

On Christmas day two years ago, Margaret’s friend presented her with an envelop. Inside was a voucher to attend a Fear of Flying Day with one of the major airlines. Considering it rude to reject the present, Margaret went ahead and enrolled on the course.

The first hour of the training day was spent talking informally with cabin crew and pilots in comfortable surroundings at the airport. A private lounge was used as the meeting place and Margaret found herself enjoying coffee and cakes as she chatted to senior staff about their jobs in the air.

Next came a short film and talk by a training captain. He casually explained how aircraft work, what procedures were used to ensure safety of passengers and crew and what a typical flight consists of. He told loads of funny and interesting stories, lightening the mood of the session.

Together with twenty other people on the course, Margaret was told it was time to go flying. As the Airbus A320 was boarded, nervous and anxious passengers were constantly reassured by the crew. The captain welcomed everyone onboard and the cabin crew made sure people were comfortable.

As the aircraft taxied along the runway, the training captain stood in the aisle and provided constant information to the passengers. He explained about the noises that could be heard inside the aircraft, and about the process of take-off. The commentary continued as the aircraft lifted into the air, most passengers completely oblivious to the fact that they were airborne for the first time in their lives.

In the air, the captain and his crew constantly talked to the passengers. Every noise, turbulence and action was explained in detail, leaving nothing to the imagination of the passengers. Finally, the approach was made for landing and, without any delays, the wheels touched the ground. Rapturous applause from passengers and crew signified a major hurdle being cleared for Margaret.

Margaret was interviewed by the local newspaper when she returned to Glasgow. A reporter had learned about her plight and decided to interview her. Thinking it might help other terrified flyers, she agreed to talk with the reporter. A short feature appeared in the newspaper the following day – the last paragraph of the report said it all. Margaret commented: “I have had many wonderful moments in my life: my marriage to Ronnie and the birth of our daughter are only two of numerous times that I have felt emotional. But by far the very best single moment of my entire life was when three young children ran to meet me as I exited from the airport terminal after a long and pleasant journey across the world”.

Art Inspired Me to Beat My Flying Fear